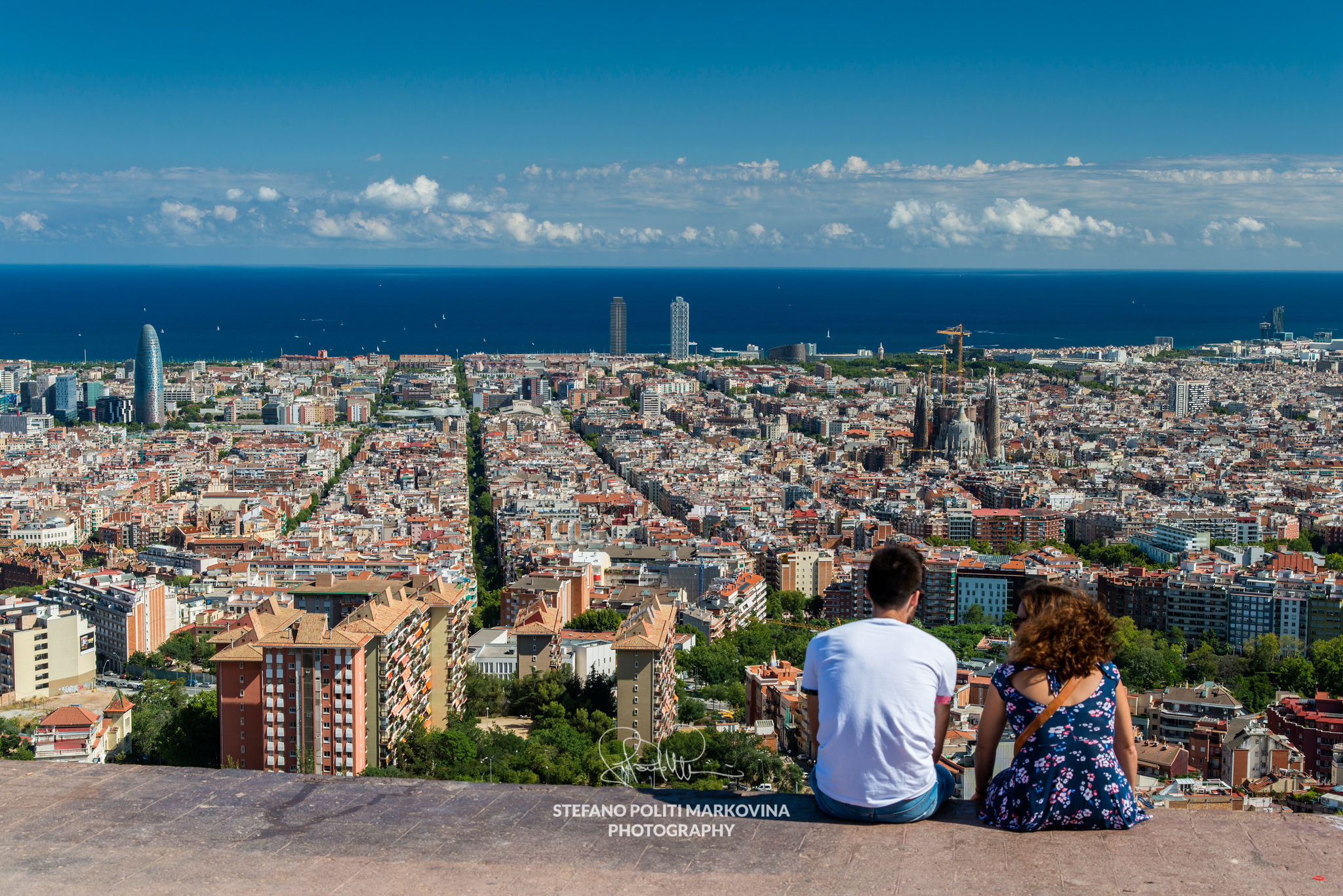 Looking for the best views of Barcelona? Barcelona reserves many scenic viewpoints to shoot images of its beautiful skyline and landmarks. Department stores, rooftop bars, monuments or parks, Barcelona is home to many locations that boast some great scenic views of the pretty old town, the beaches or the entire city. Though most of my suggested places are tripod friendly, remember to be always discrete when you use it. Here is a list of some of my favorite places where you can have the best views of Barcelona. Also you find some information about how to get there and the best light of the day to catch photos. 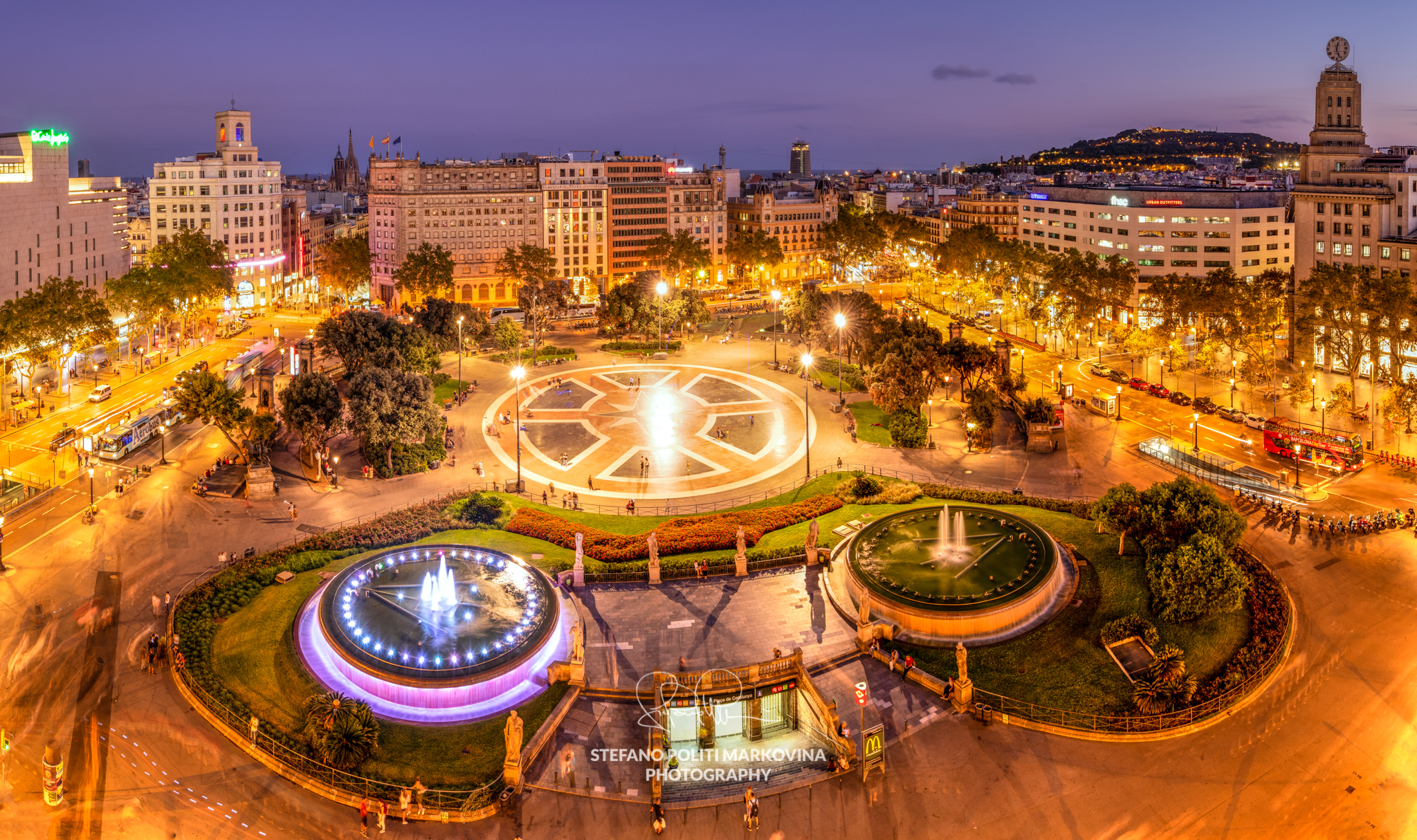 Located inside Iberostar Hotel and opened since 2018, this beautiful and spacious rooftop terrace is the latest add among the many locations offering skyline views in town. Great view over the central Plaza Cataluña square and its surrounding buildings, including the El Corte Inglés department store. Go there for twilight to get the best pictures. 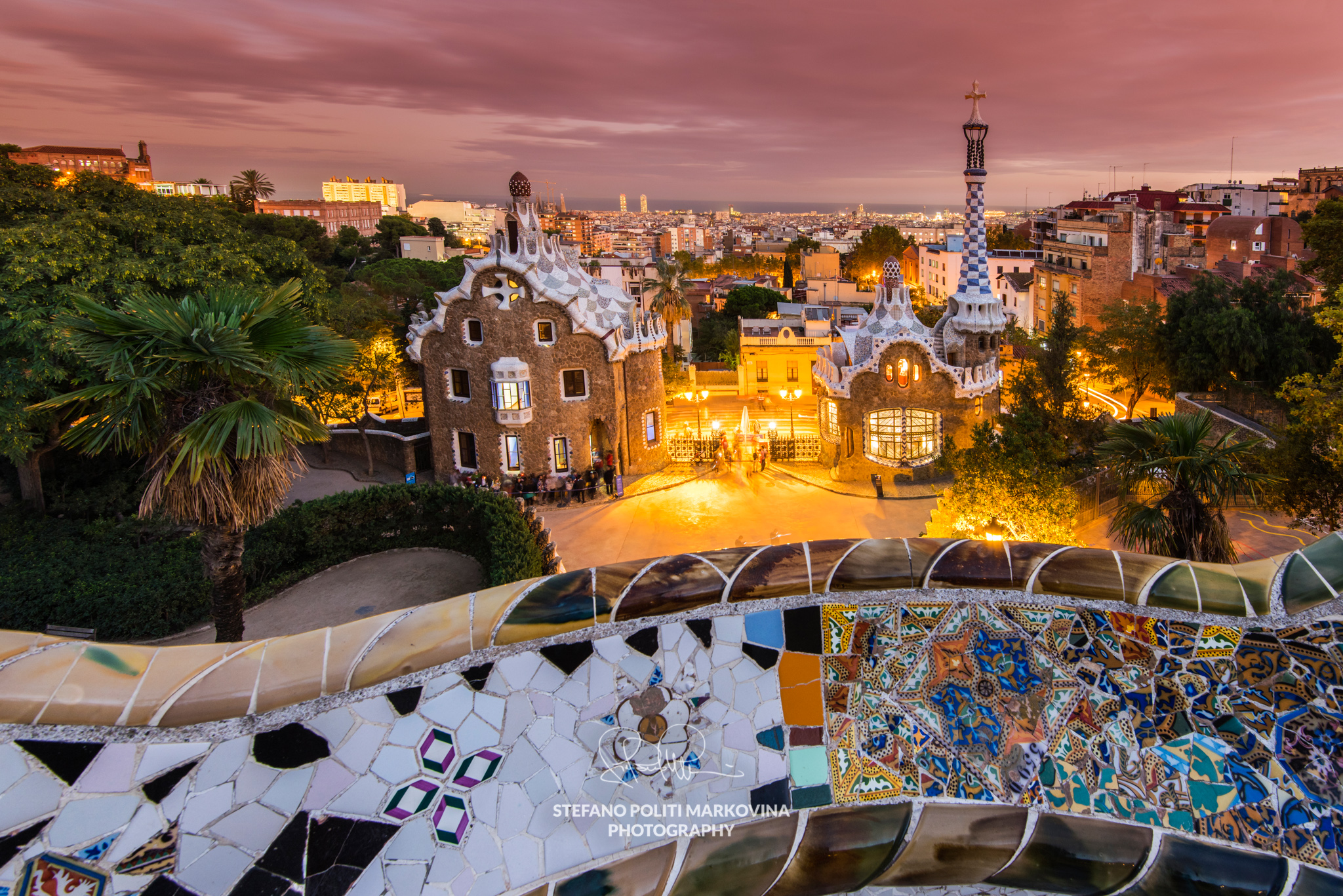 This worldwide famous public park, designed by Antoni Gaudí and declared World Heritage Site by UNESCO, is located on Carmel Hill and offers a partial view of the city toward the sea with the two Gaudí’s buildings at the entrance. It’s one of the most famous and iconic views of Barcelona. As Park Güell is one of the most popular tourist destinations in town, try to get there very early in the morning. There is a 8€ entrance ticket but if you get there before 8 AM you can still get in for free. At that time you can take some nice shots against the sun light. The best light for taking pictures of the skyline is in the afternoon. Otherwise, opt for shooting some great images at dusk. At that time, right before the park closes, most of tourists will be gone already. Use of tripod is admitted. The easiest way to get there is by taxi, otherwise, take the metro (L3 line) and get off at Lesseps station. From there follow the tourist road signs till the park (15-minute walk). 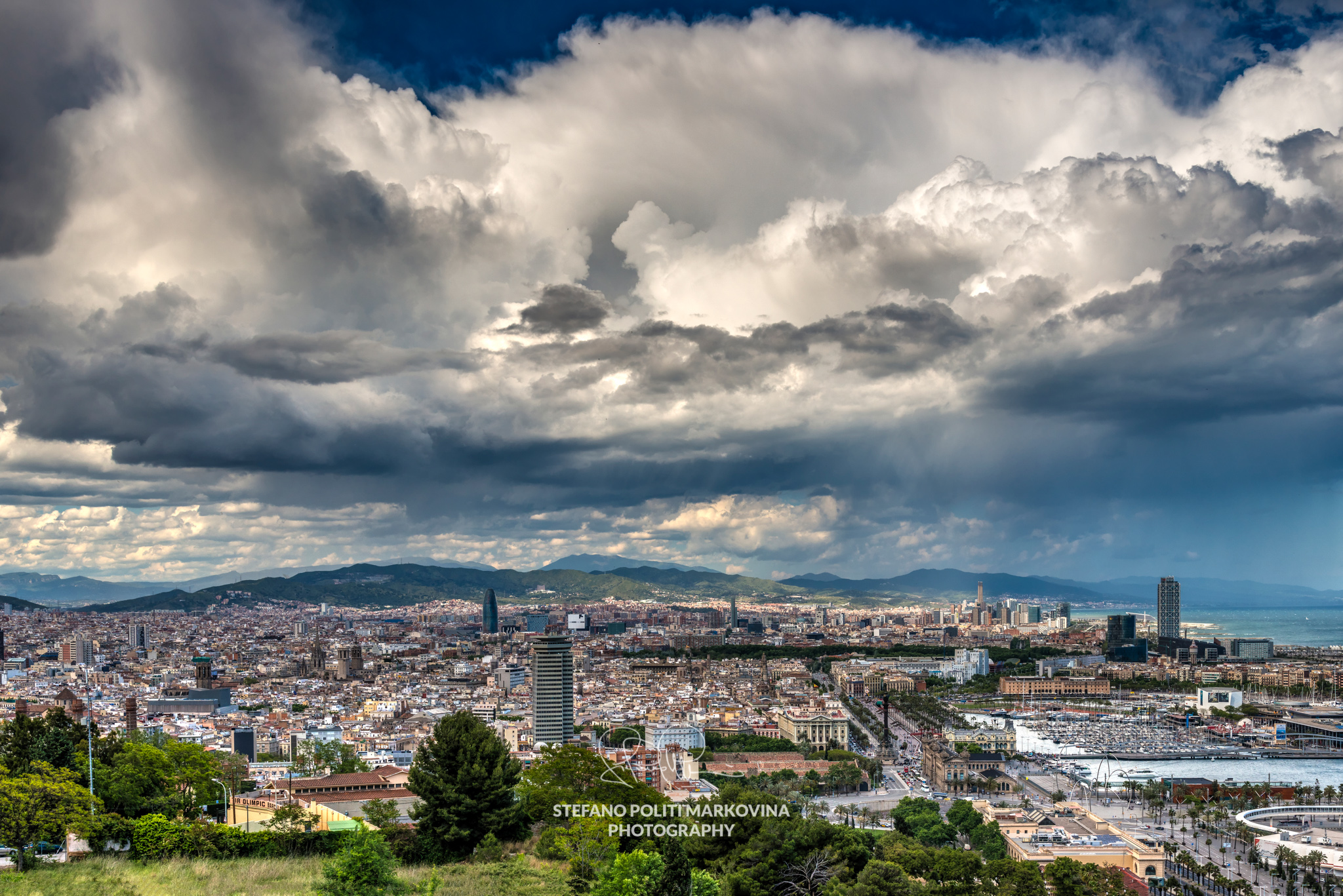 This easily accessible viewpoint is a beautiful terraced belvedere that boasts some spectacular views over the city including most of Barcelona’s famous landmarks. Best light in the afternoon. Great location for shooting also at dusk/evening. To get there take bus 150 from Plaza España and get off at the last stop (Montjuïc Castle), then, walk down the Carretera Montjuïc street for some 200 metres. The viewpoint is on the right side of the street next to a small cafe kiosk. Among the best views of Barcelona this is my favourite one. 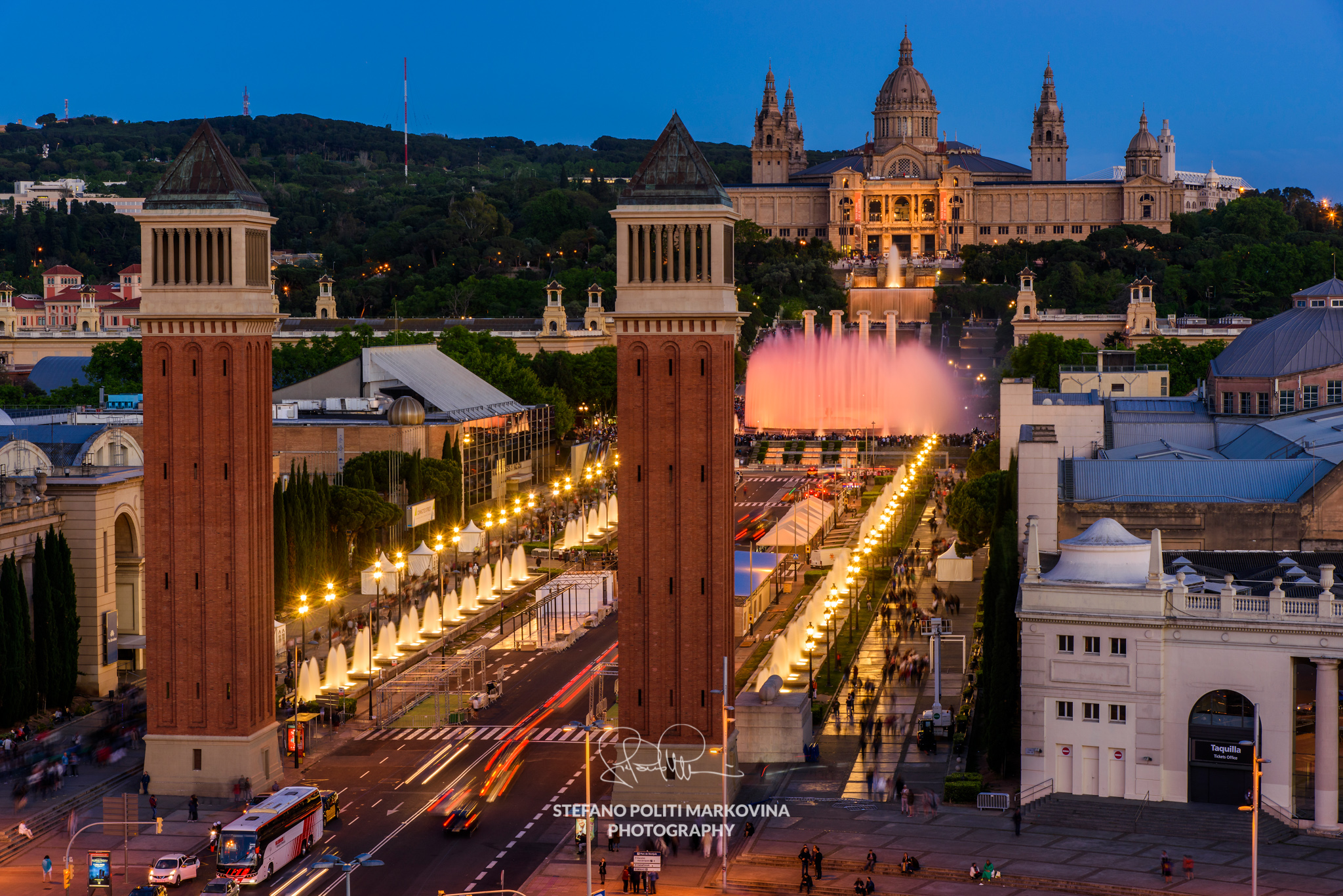 The beautiful rooftop bar with swimming pool of this 4 star hotel (located at Plaza España, 6-8) offers a great view over Plaza España and toward the Magic Fountain and Montjuïc. The hotel rooftop bar is open also to non-guests. Best light in late afternoon. Great photos also at dusk/evening when the Magic Fountain light show is on. The rooftop bar is open from May to October only. Check the hotel for the right dates. Tripod admitted. To reach the hotel simply take the metro (L1 or L3) and get off at Espanya. 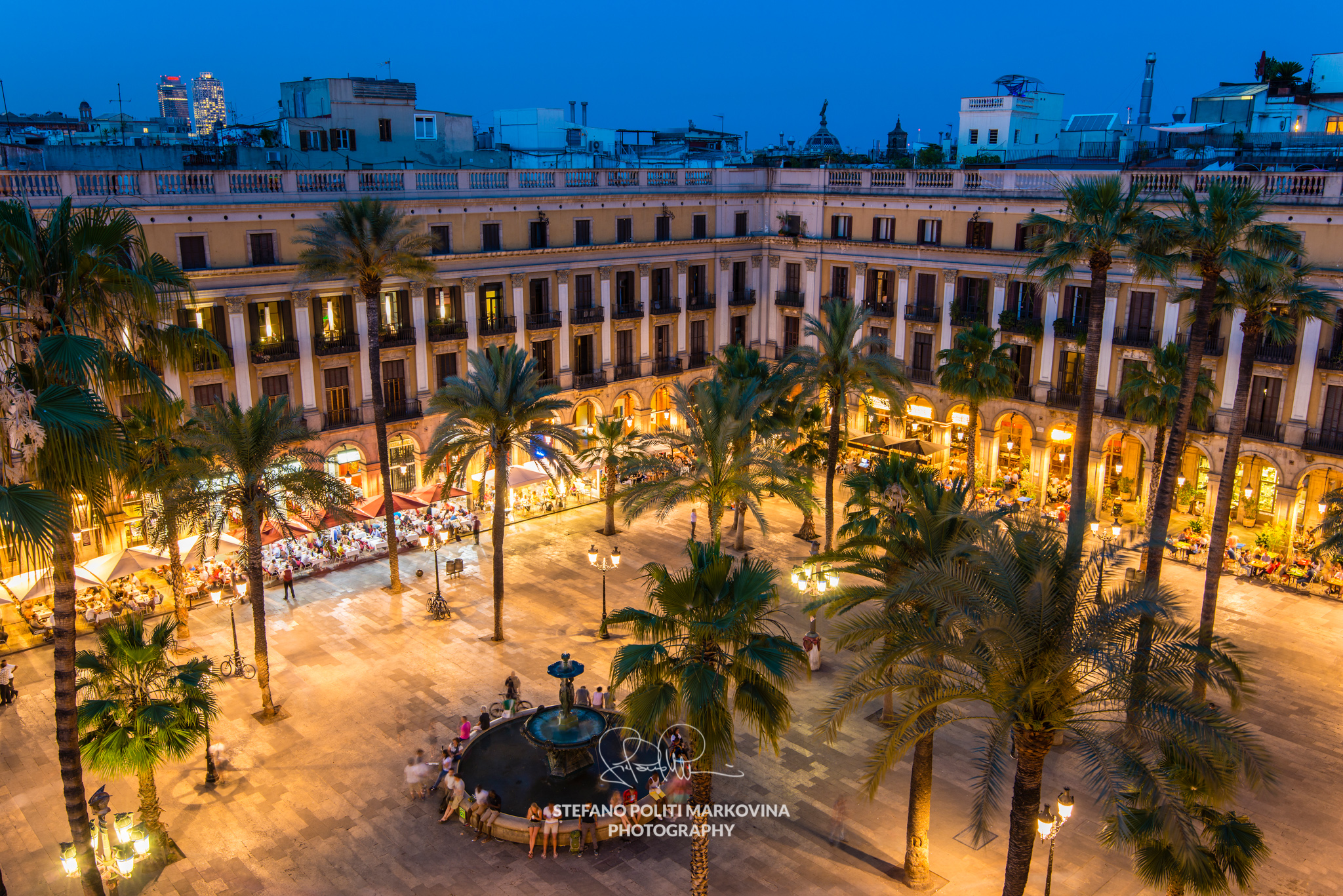 This rooftop bar restaurant offers a great view over the historical Plaza Real, one of the most beautiful squares in town with its outdoor cafes aligned along the old arcades and the palm trees in the middle of the square. The bar is located inside the Hotel DO (Plaza Real, 1). Best light on late morning when most of the square is under the sun but, for me, the best moment is at dusk/evening when you get all the lights on in the square. Tripod admitted but as there’s little space between the tables and the view make sure you have a reasonably small one. To reach the rooftop bar take the metro (L3 line) at get off at Liceu station. Plaza Real is just 3 minutes on foot from the exit. 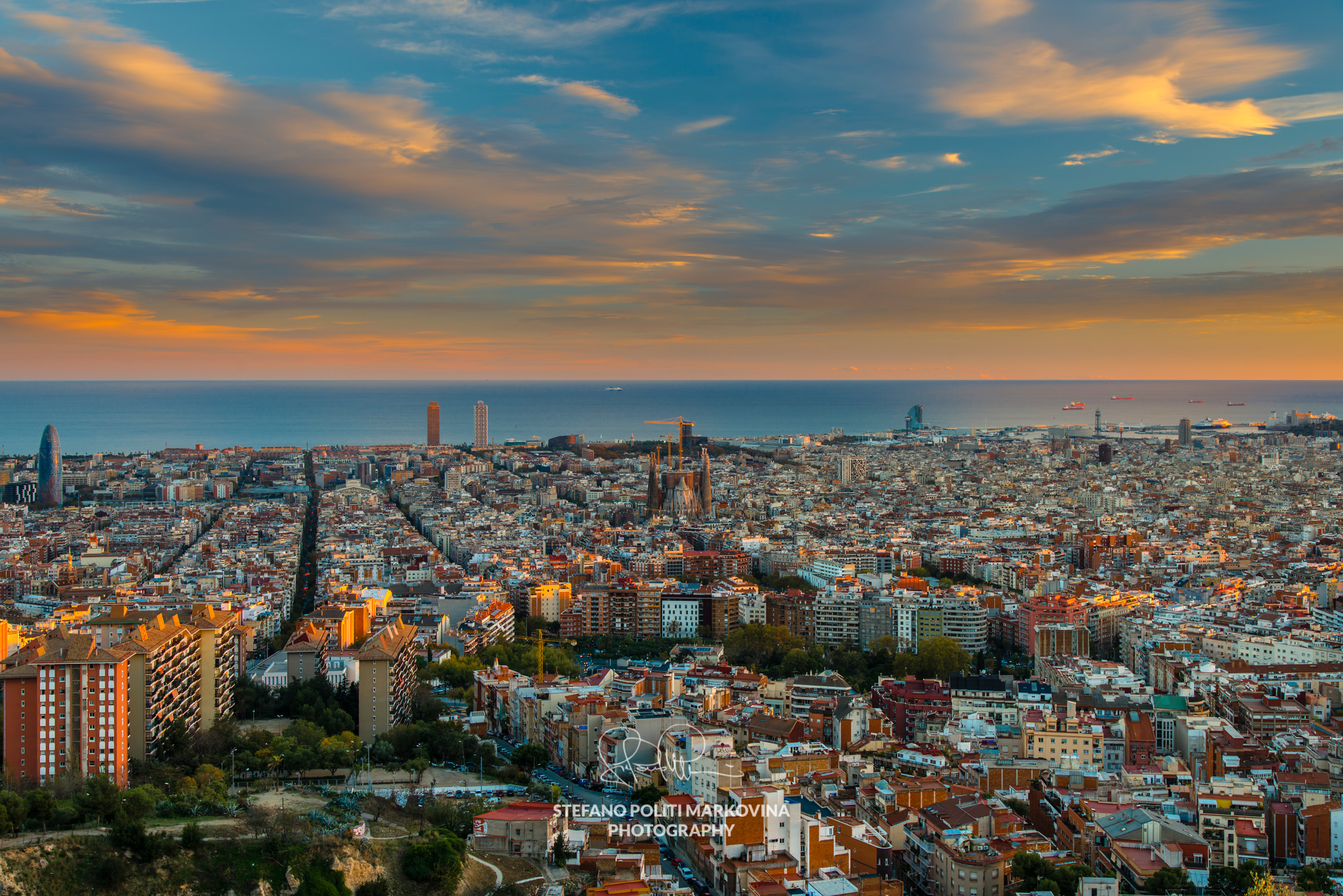 Till a few years ago only this viewpoint was well off the beaten path but since this historical landmark has been restored more tourists are coming up here to enjoy one of the best views of Barcelona, especially at sunset. The viewpoint is located on the Carmel hill The view from the Bunker del Carmel Turó de la Rovira embraces all the city toward to the sea and includes several Barcelona’s iconic landmarks including the Sagrada Familia church, the Agbar Tower and the modern W Barcelona Hotel. Best light in the afternoon, sunset and dusk/evening. To get there take the metro (L3 line) and get off at Penitents station. Then take bus 119 and get off at Panorama – Marià Lavèrnia stop. From the bus stop is a some 300-metre walk up to the viewpoint. 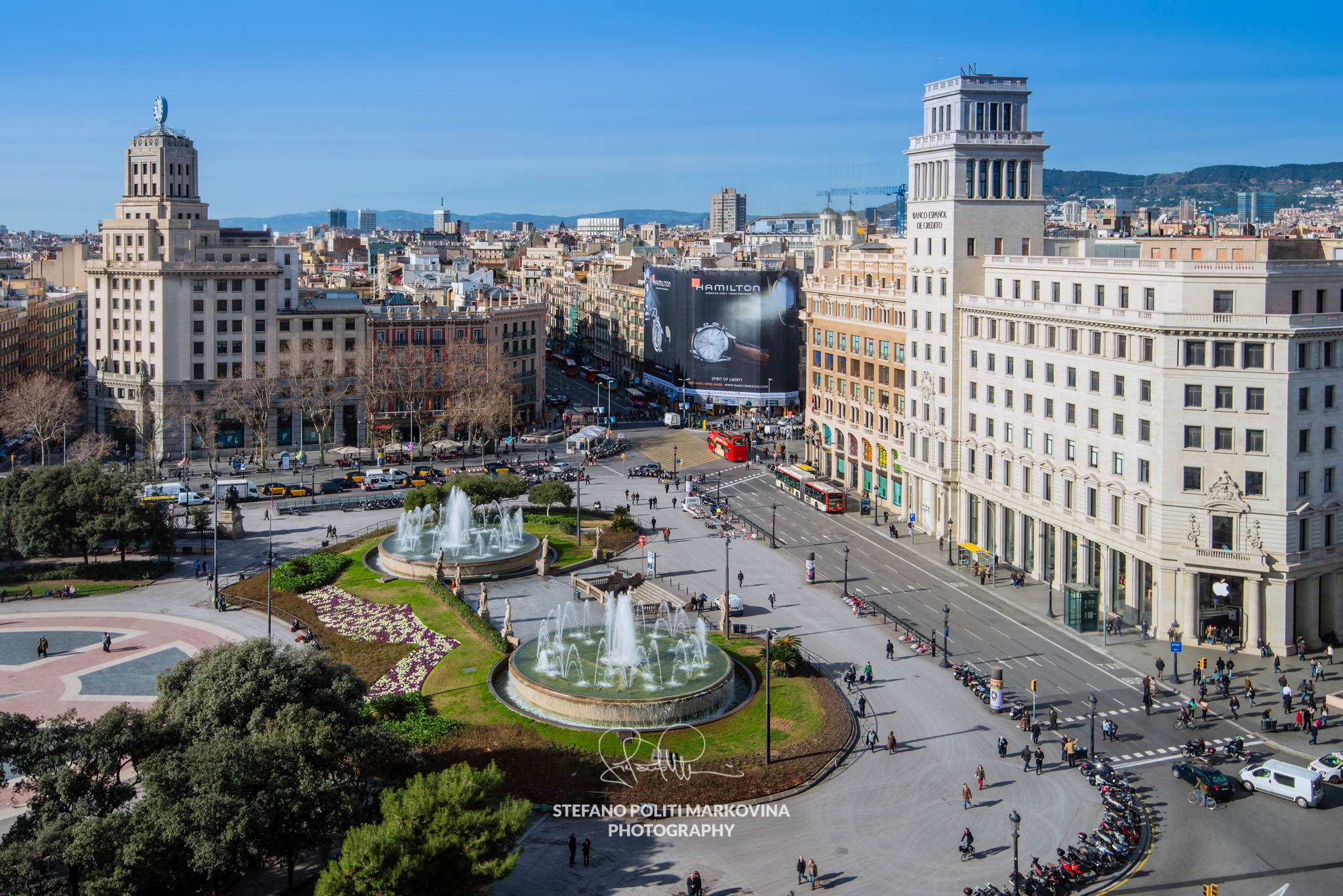 This central located department store offers a recently renewed rooftop bar restaurant with a great view over Plaza Catalunya, the nearby Passeig de Gracia avenue and, more generally, toward the western part of the city including Montjuïc hill. Best light in the morning. Though the bar is open till late, any attempt of shooting at night is ruined by the reflected lights in the windows, unfortunately. Avoid use of tripod. To reach the Corte Inglés department store take the metro (L1, L3, L6, L7 lines) and get off at Catalunya station. 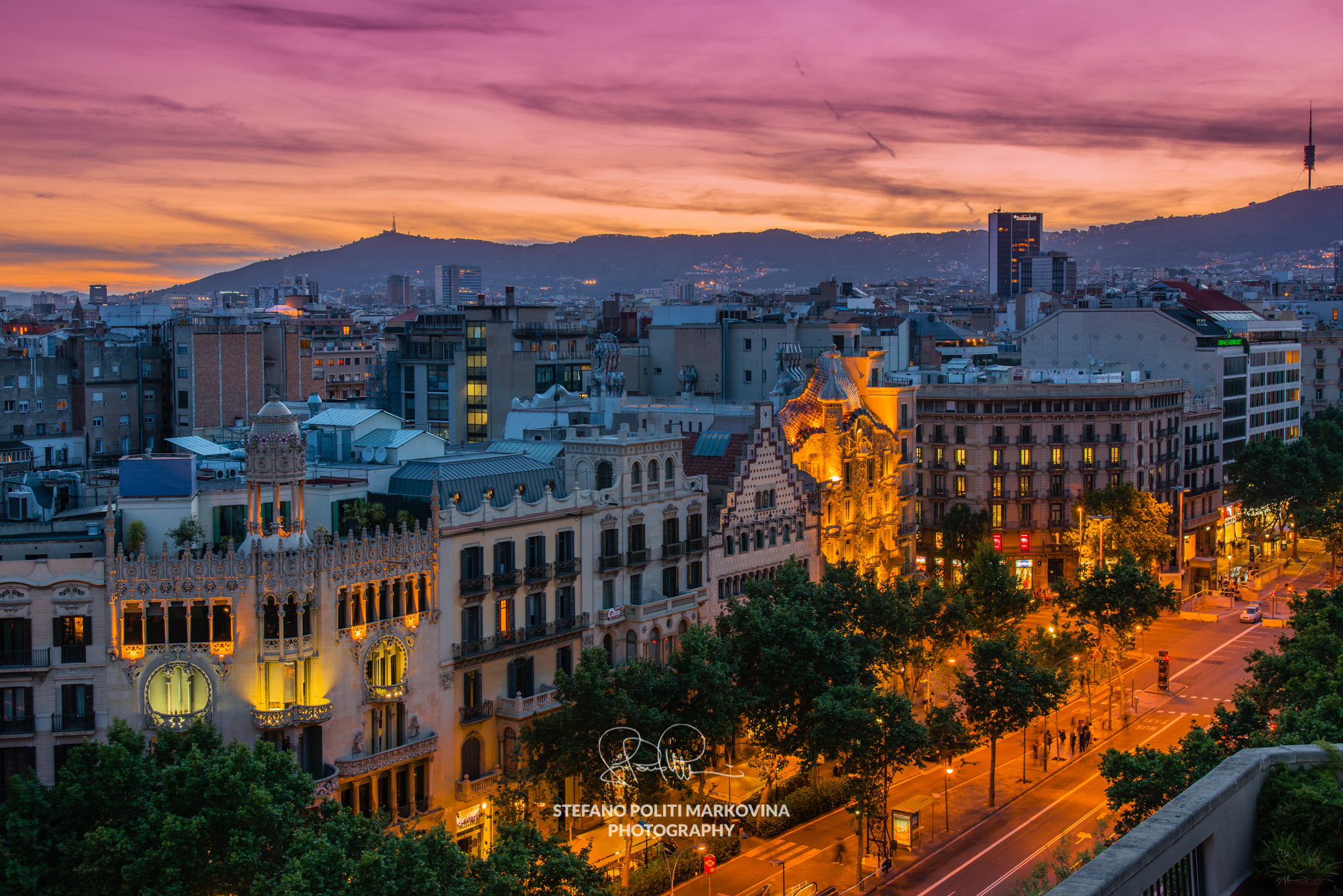 This famous luxury hotel located in Passeig de Gràcia, 38-40 has a (expensive) rooftop bar open also to non guests. It’s a great location for shooting images at sunset and, especially, dusk/evening over Passeig de Gràcia avenue and its beautiful historical buildings, including the Gaudi’s Casa Batlló. The rooftop bar is open only from the end of April to October but check the hotel to know the right dates. To get there take the metro (L3) and get off at Passeig de Gracia station. 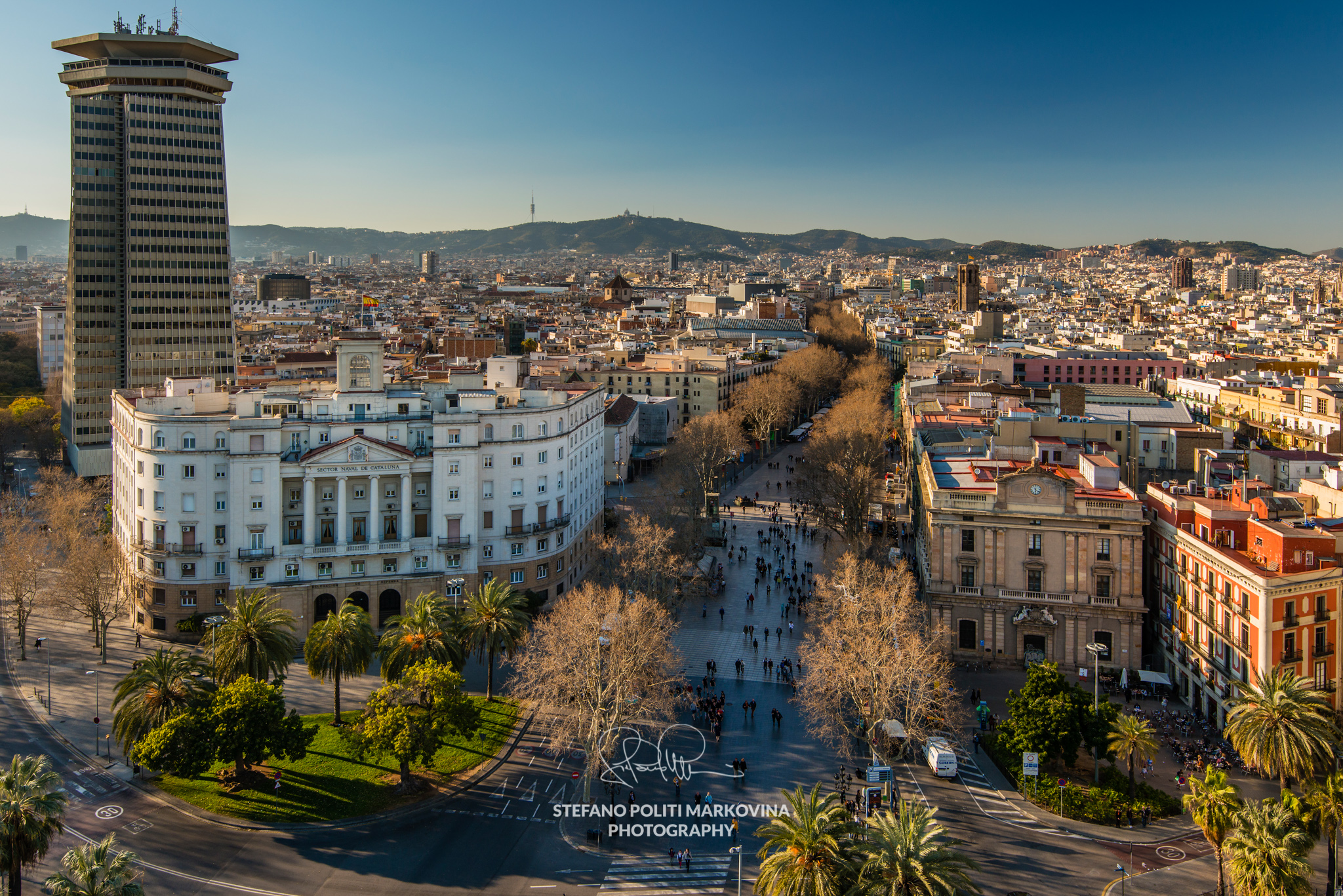 This historical 60-metre tall monument constructed for the 1888 Barcelona Universal Exposition in honor of Columbus’ first voyage to the Americas has some great views over the famous Rambla pedestrian mall, the Gothic Quarter and the waterfront. Best light in the afternoon when the waterfront area is not against the sun light. To get there take the metro (L3 line) and get off at Drassanes station, then follow the Rambla down to the sea. The monument is in the middle of a roundabout. 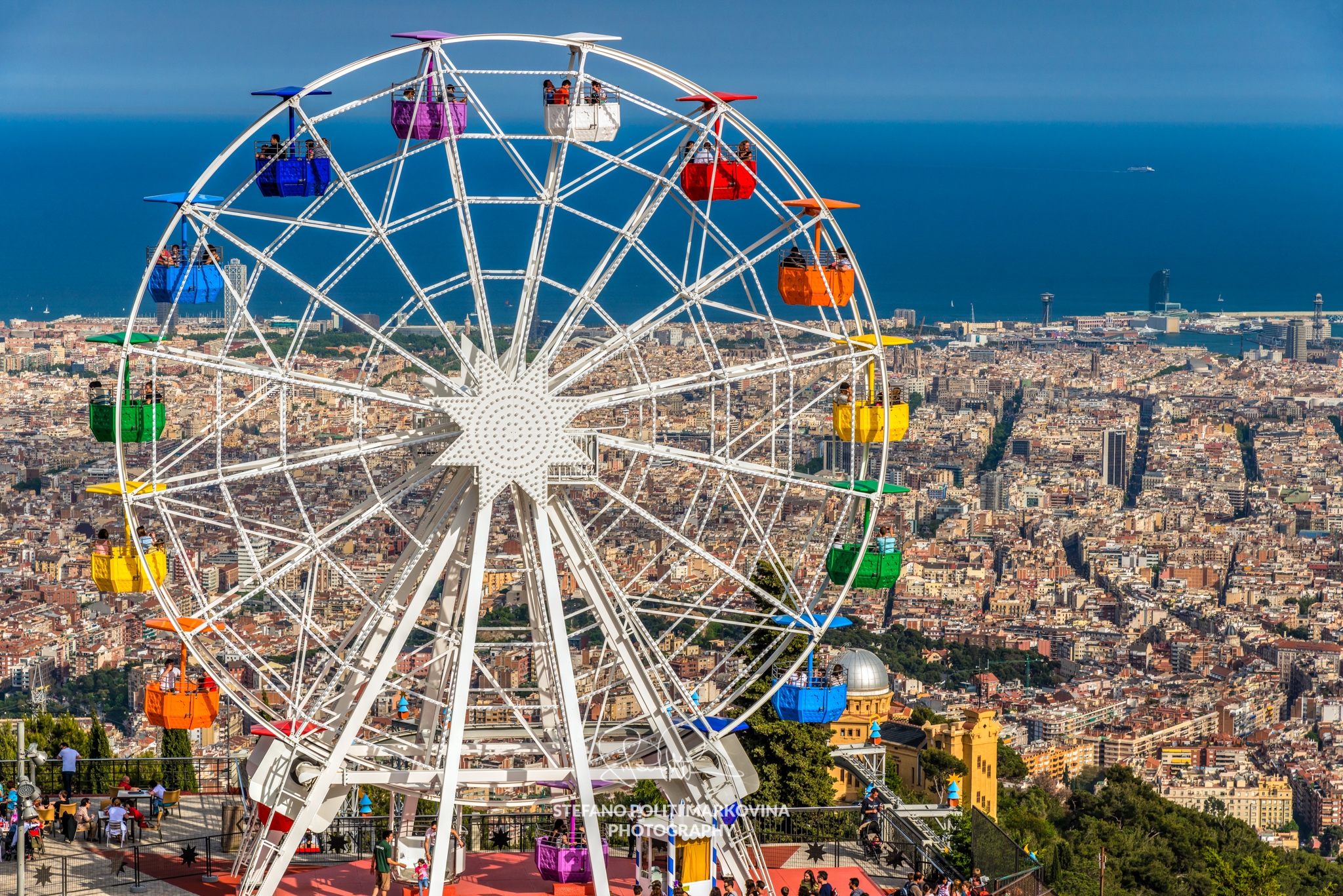 At 512 metres above sea level, Tibidabo is the highest point of Barcelona. No wonder you can enjoy breathtaking views all over the city and get some great photos. Some photographers say this is the best view in town but, honestly, I prefer other locations. In my opinion, the all over view you get from Turó de la Rovira is better as,  despite its lower elevation compared to Tibidabo, you’re much closer to the city and its landmarks are more easily recognizable. Best light in the afternoon, sunset and dusk/evening. To get there from the city centre the quickest and easiest way is to take the T2A bus in Plaza Catalunya which brings you straight up to Tibidabo. As this bus line doesn’t belong to the Barcelona’s TMB public transport network you have to pay separately in case you have a TMB metro/bus ticket. This bus line runs only during the Tibidabo amusement park’s opening hours. Otherwise, take the metro (L7 line) and get off at Avinguda Tibidabo station. From here take the bus 196 till the last stop and once you get off the bus take the Tibidabo funicular railway. Keep in mind the funicular runs only during the weekends in January and February. 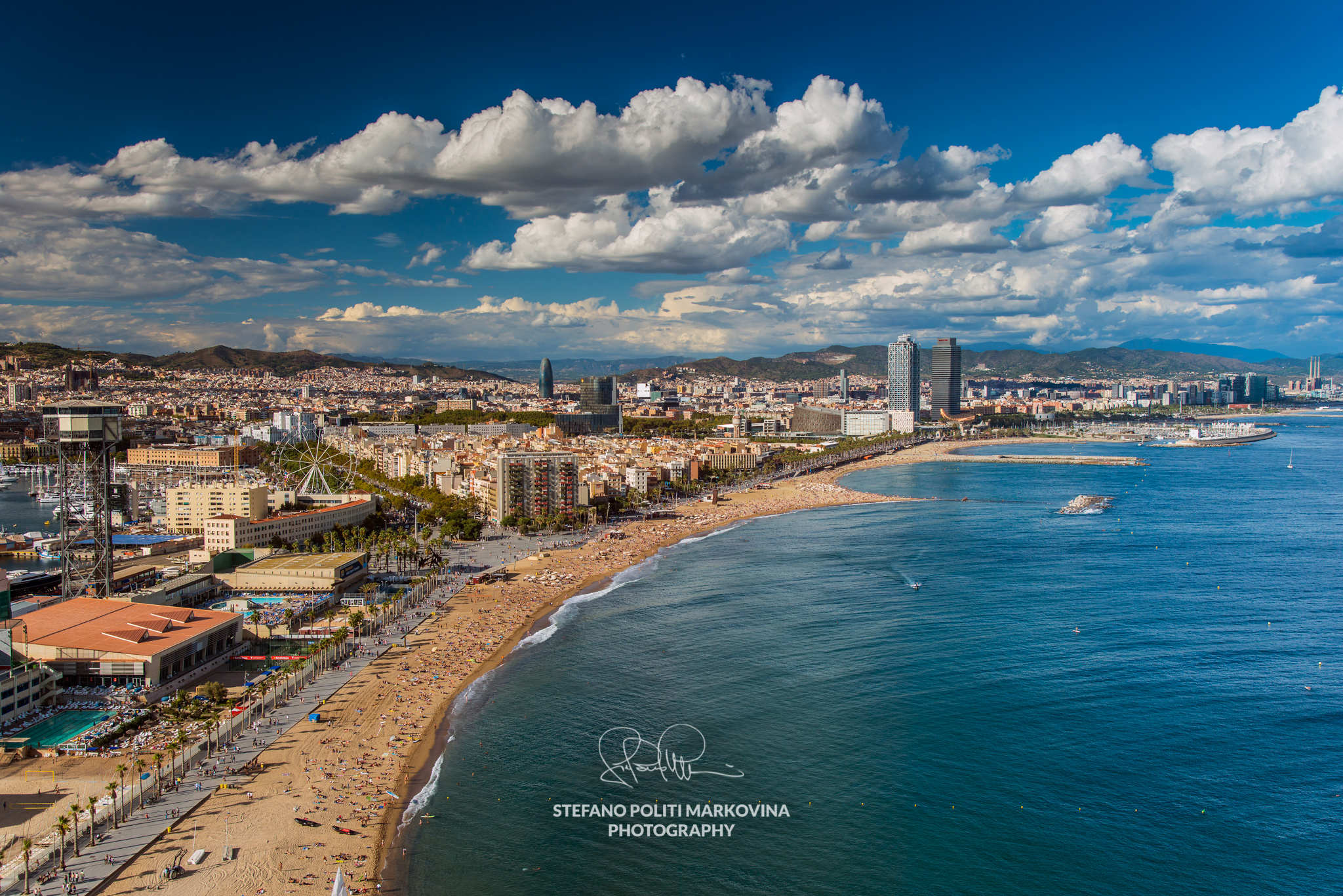 Located at 26th floor of the luxurious W Barcelona Hotel (at Placa de la Rosa dels Vents, 1), this bar has the best vistas over the city beaches, the waterfront and Barceloneta district. Best light in the afternoon and dusk/evening. To get there take the metro (L4 line) and get off at Barceloneta station. From there take bus V15 or 39 and get off at the last bus stop which is near the hotel. 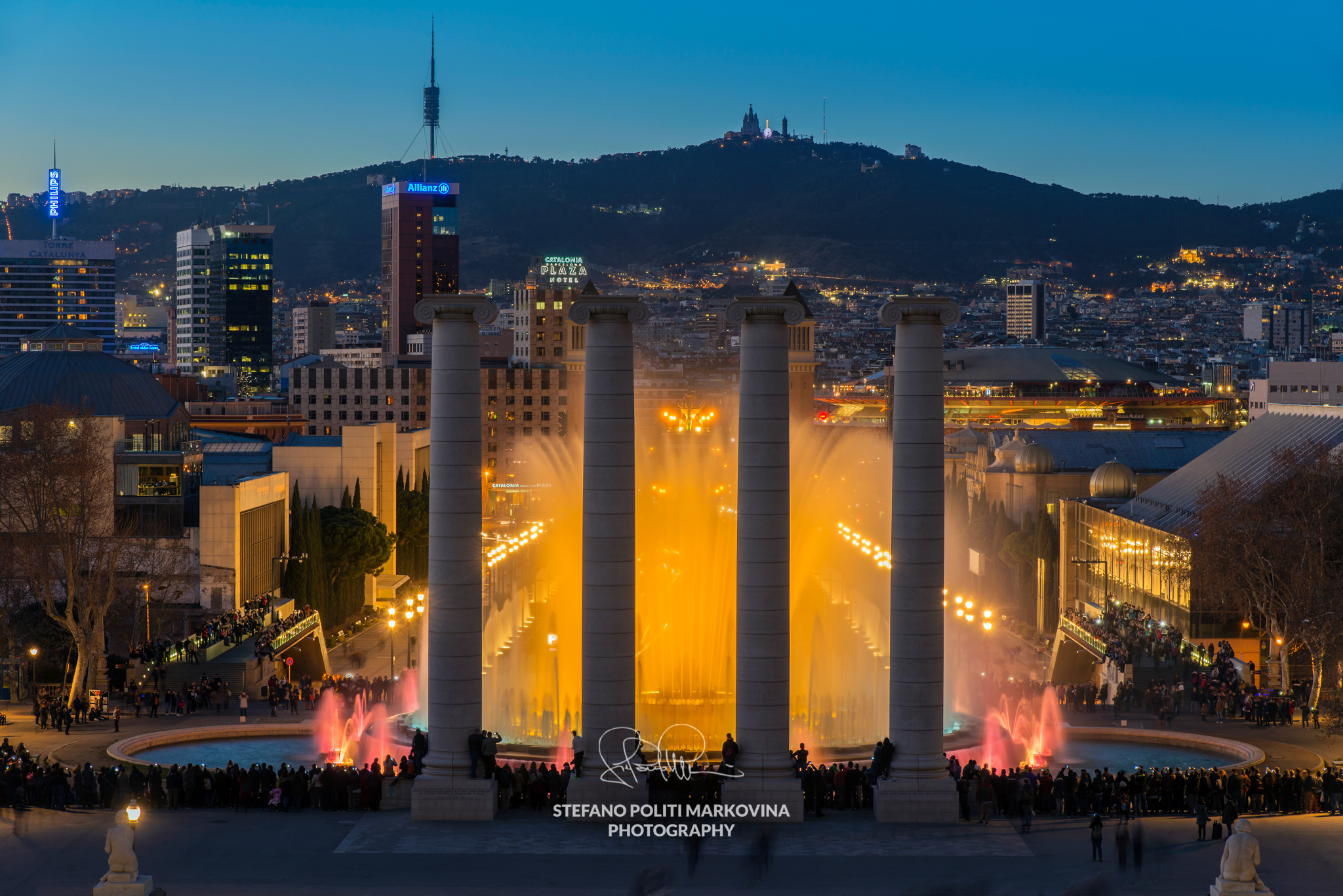 Located on the summit of a staircase in front of the entrance of the National Museum of Catalan Art (MNAC), this is a great viewpoint to take photos of the Magic Fountain light show. You can easily reach it by metro (L1 and L3) and get off at Espanya station. Best light in the afternoon, sunset and dusk/evening. From there is a 10-minute walk following  the Avinguda Reina Maria Cristina. If you want a slighter higher view, buy the 2€ ticket inside the museum to gain access to the roof terrace where the views embrace also the Sagrada Familia church.