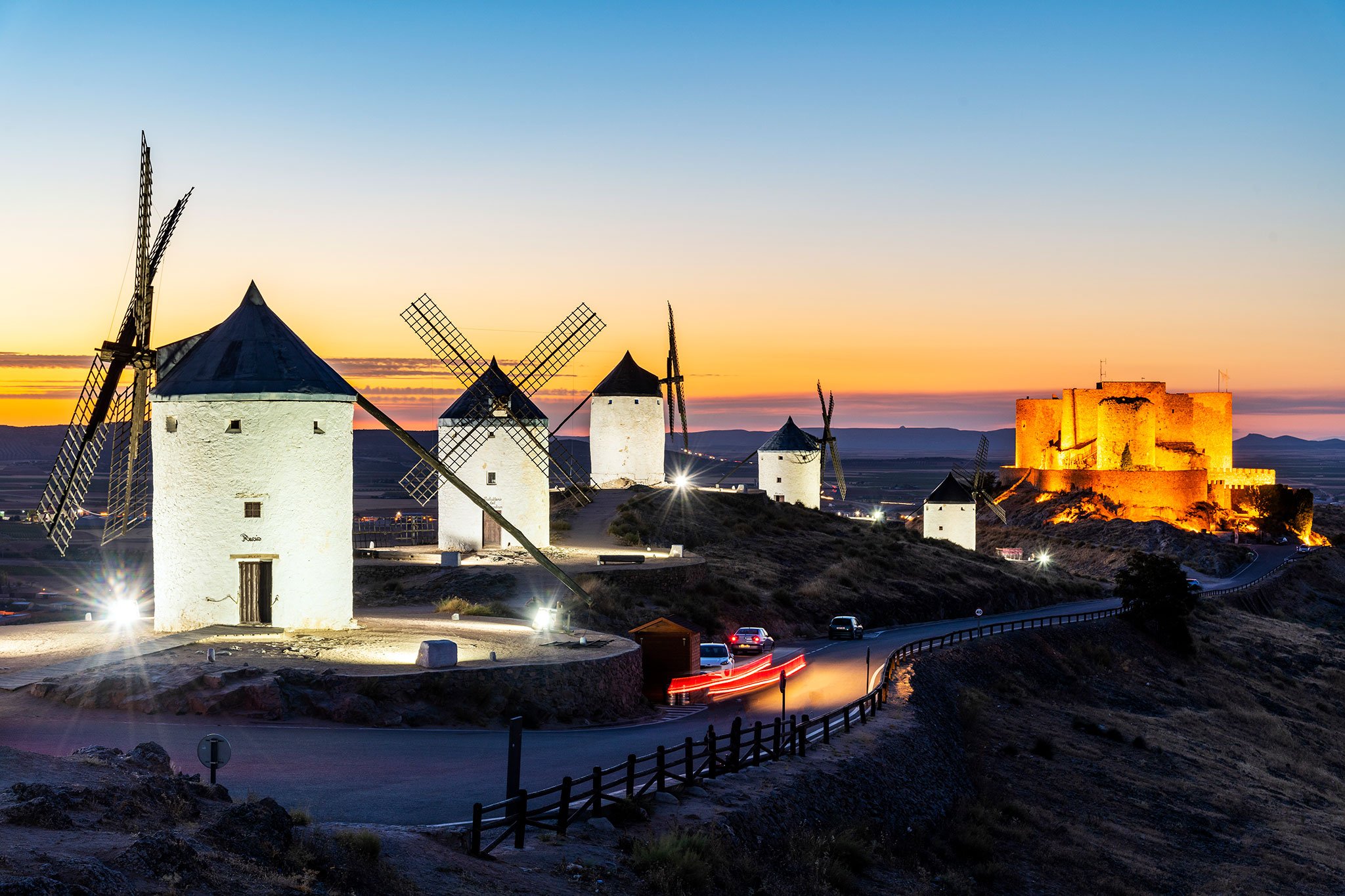 Spanish community of Castilla-La Mancha is worldwide famous for its iconic white windmills. In the last few years, these windmills caught also the interest of more and more photographers. Their fame is due to the epic novel Don Quixote (The Ingenious Gentleman Don Quixote of La Mancha) written in the early 17th century by Miguel de Cervantes, the greatest writer of Spain.

One of the most-translated books in the world, Don Quixote tells the adventures and the misfortunes of Alonso Quijano, a member of the La Mancha's lowest nobility. Too much avid reader of chivalric romances, he ends up with pretending he lost his mind and become then a knight-errant to serve his country under the name Don Quixote de la Mancha. Along with his pragmatic squire, Sancho Panza, he will seek adventure all over Spain.

The white windmills became famous as in the first adventure of the book, Don Quixote mistakes a field of windmills for giants and attempts to fight them but finally concludes that a magician must have turned the giants into windmills.

Windmills were introduced in this Spanish region to help local millers to grind wheat. Transmitted from fathers to sons for many generations, the windmills eventually stopped being used at the beginning of the 1980s and then abandoned. Many of them have been restored only at the begin of this century. 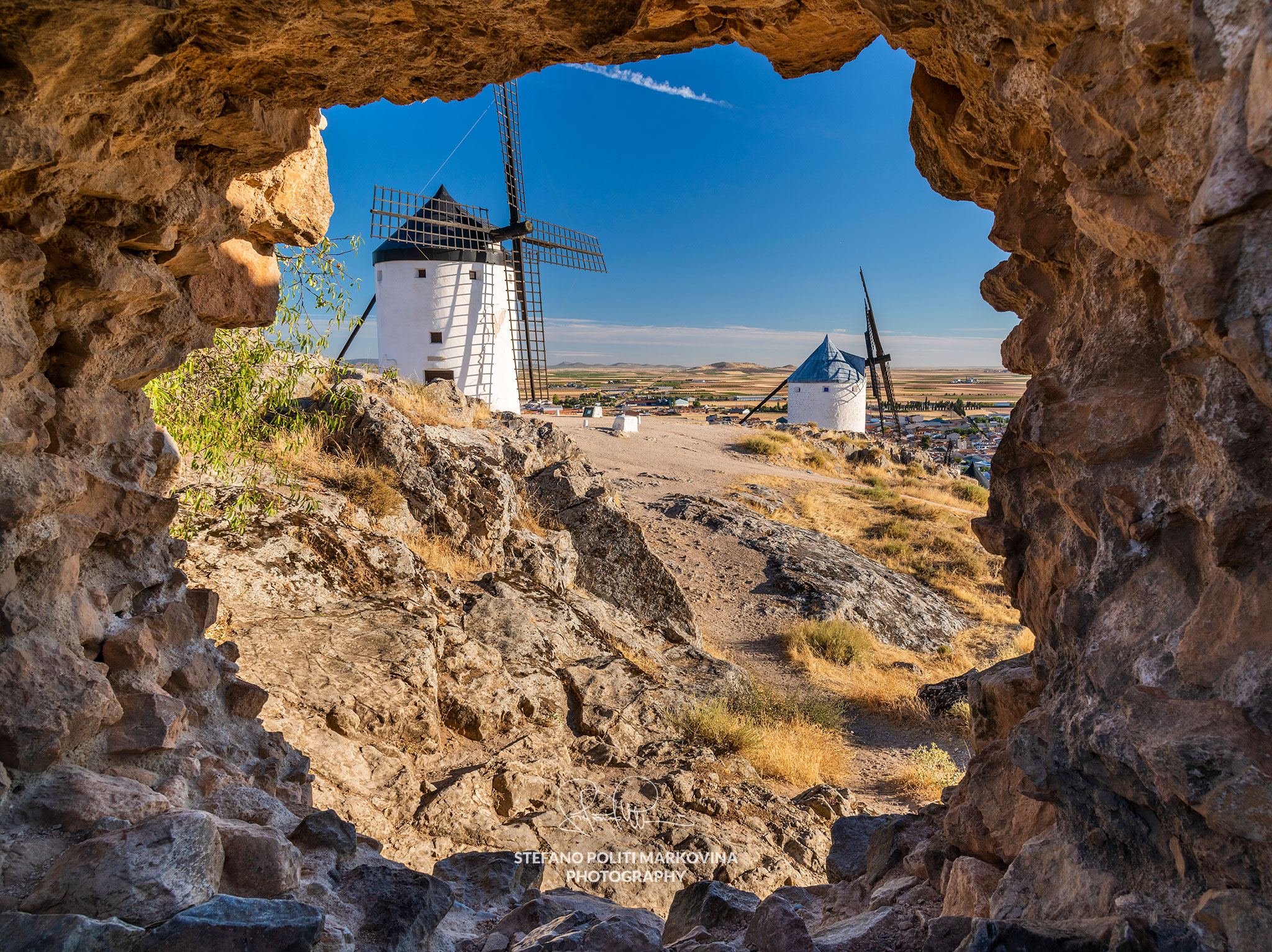 Traveling south of Madrid through the sprawling plains of Castilla-La Mancha, you can see rows of white windmills crowning the hilltops or lonely windmills standing in the landscape's solitude like a lonely warrior.

12 of the 13 original windmills in Consuegra have been reconstructed. Along the nearby 12th-century dated Castle of La Muela, they were declared Spanish cultural historic site in 2006. The windmills dominate Consuegra's townscape from the rocky hilltop. This is the PLACE where most of visitors go to see windmills and having pics or selfies taken, unfortunately. So, expect hordes of tourists in high season and holidays, especially at sunset. To avoid them, try to be there for sunrise when light is gentle and the warm tones paint the white windmills and the castle. As the windmills are illuminated at night, wait for twilight for some great photos where you can shoot the last red/orange tones of the sky at distance and the single windmills shining in the dark. At that time, most of the visitors are gone, even in high season. In winter, you will have all the windmills for yourself if you avoid weekends. 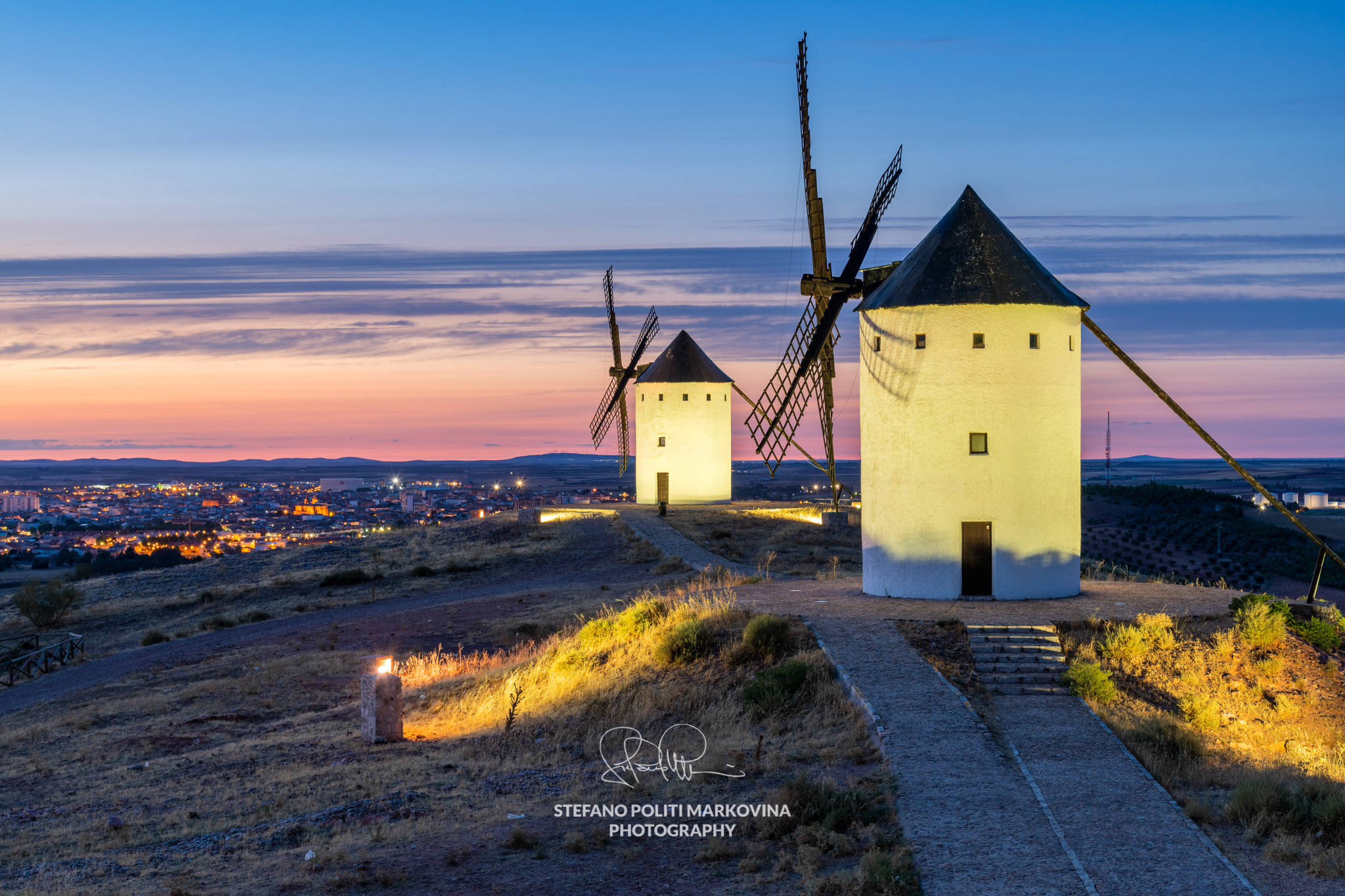 You'll find similar whitewashed windmills also in Alcázar de San Juan and Mota del Cuervo (respectively, 40 km and 75 km driving east of Consuegra). Like in Consuegra, the iconic Spanish windmills spike the hilltop with great views over the nearby town and the surrounding vast plains. You'll find much less tourists here as most of visitors are locals who go there for sunset views. The windmills in both cities are as scenic as the ones of Consuegra except you don't have a medieval castle in the picture.

For some different white windmills' photos, head to Campo de Criptana and Belmonte (respectively, 49 km and 93 km driving east of Consuegra). The ones in Campo de Criptana are the only ones to be so close to the town to be part of the urban complex (see my aerial photo). Beside shooting photos from the windmills' field, you can frame some of them from the near picturesque cobbled streets between whitewashed houses. Take your time to walk around and spot the most scenic or interesting views with houses and windmills. Campo de Criptana is becoming rather a popular destination for Spanish windmills sightseeing. Though, not famous (yet) like Consuegra, it would be a good idea to get there in early morning. Belmonte is more famous for its stunning ancient castle than for its windmills. Differently, from the windmills of the other suggested towns, the Bemonte's ones are not white and you'll have high chance to shoot the windmills without any visitor around. 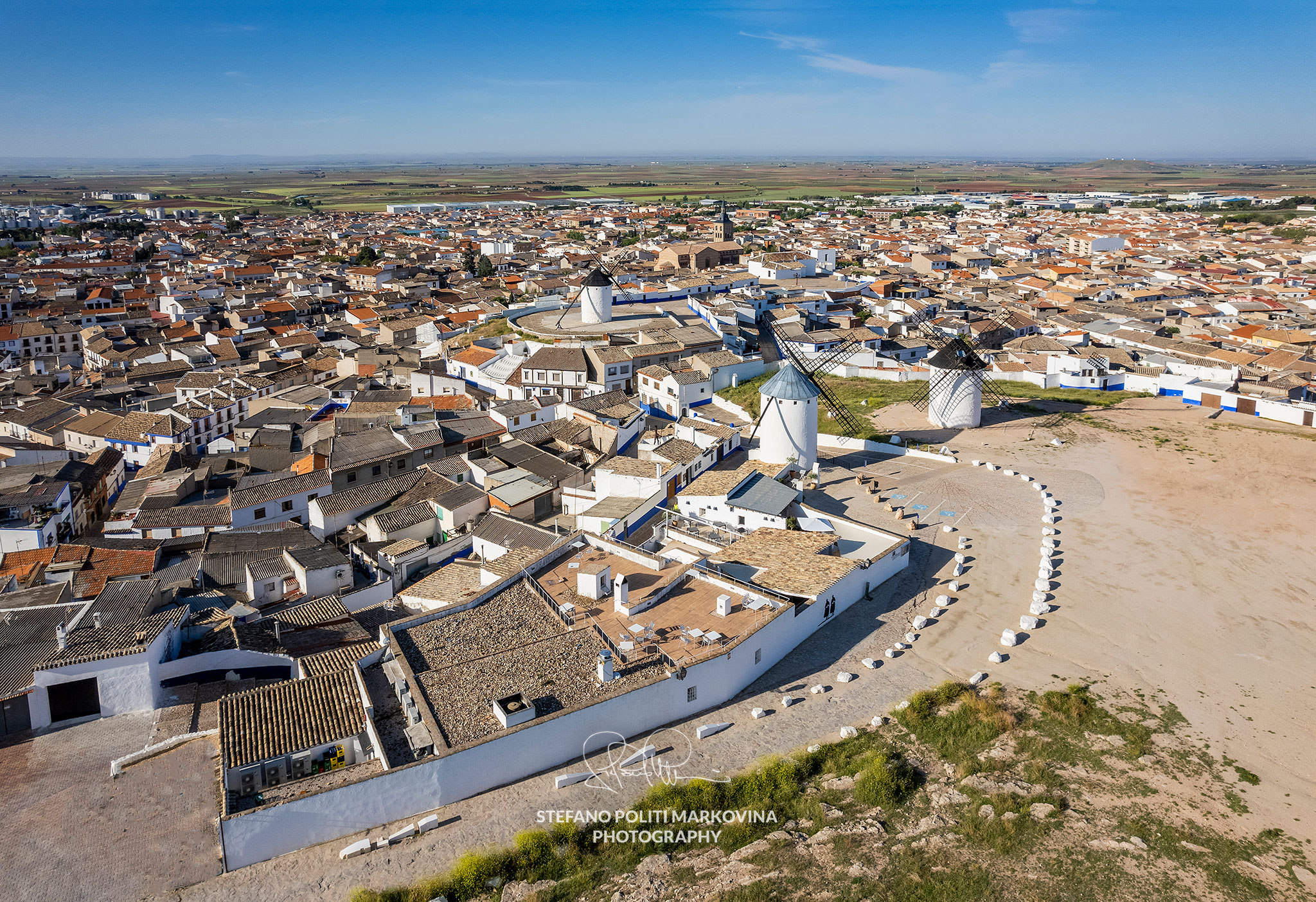 By shooting windmills during the golden hours (early morning or late afternoon), you will get a gentle light and warm tones in your photos. Alternatively, the harsh light of summer days offers interesting photos full of light and contrast with the intense blue sky opposed to the bright whitewashed windmill. Use a polariser filter to maximise this contrast.

Remember that the bright whitewashed wall can fool your camera meter into underexposing very easily. In order to get a correctly exposed photo you have to give between one and two stops more exposure, at least. Set your camera in Manual (M) to do so.

Take photos of windmill's details like its pale's shadow or shoot the windmill with yellow field flowers (or poppies) around if you go in spring (April-May, particularly). Try also some long angle photos.

Often, the blue skies of Castilla-La Mancha fill with scattered harmless clouds. Let them be part of your photo will increase the sense of depth behind the windmill(s).

As windmills are enough far away from main sources of light pollution, think also of shooting those not illuminated at night (for example, the windmills in Belmonte).

These are the recommended tips for shooting windmills at night: