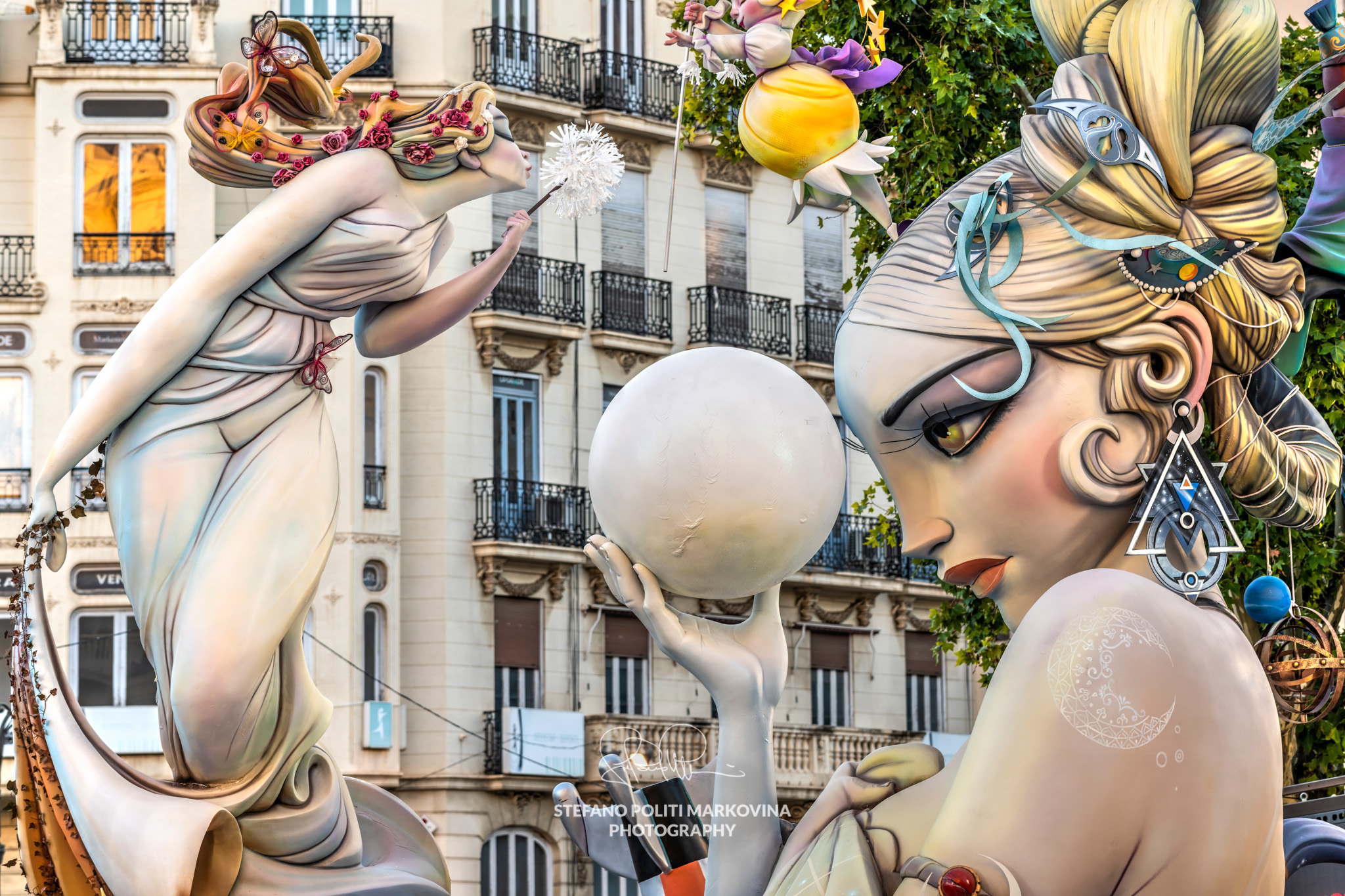 The Fallas (or Falles in Valencian language) are one of the most incredible and riotous fiestas you can photograph in Spain. Photographing fallas is a perfect blaze of colors, people, parades and fireworks for the happiness of your camera. 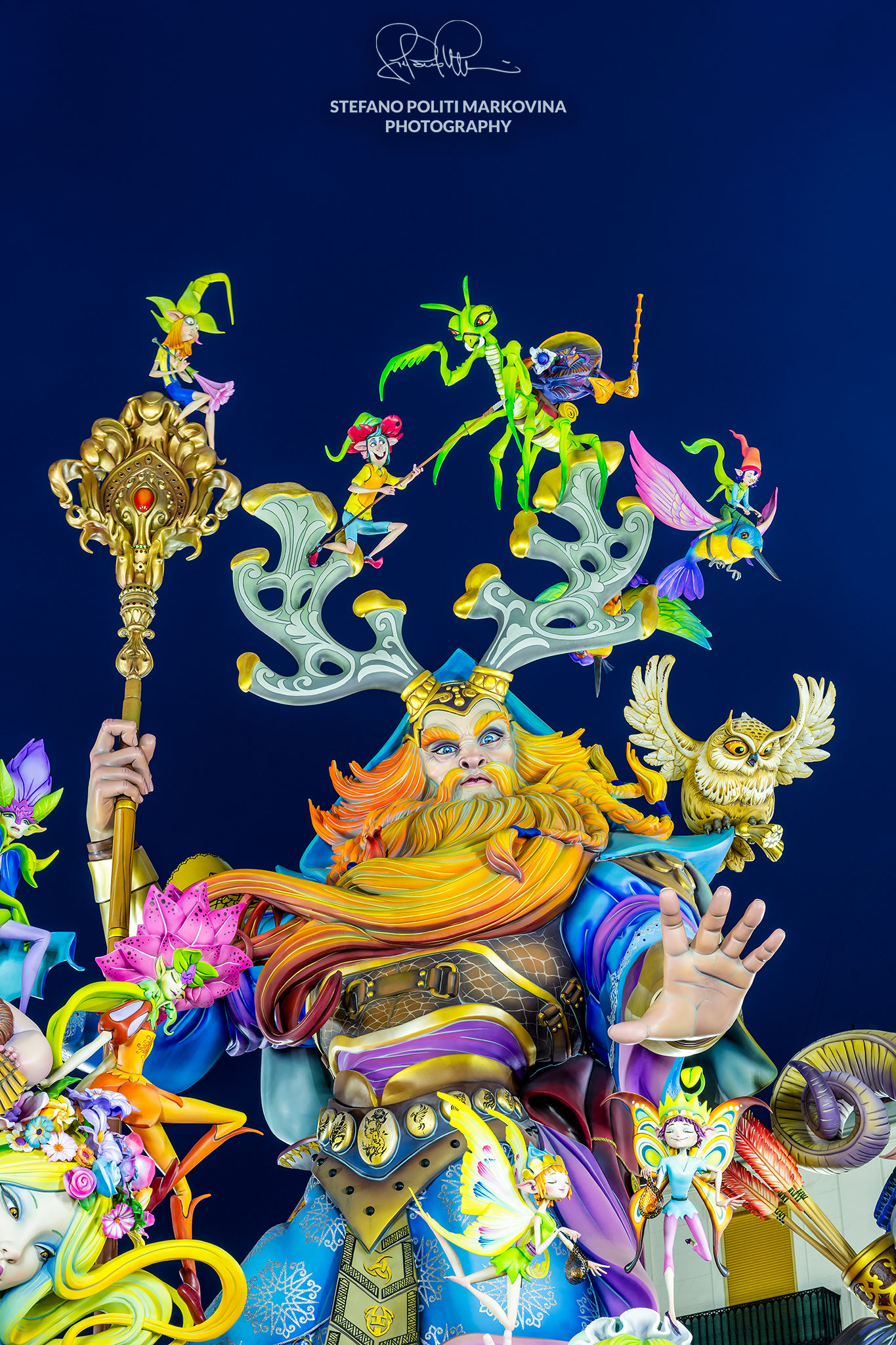 If you are into street photography this is an event you won't miss at all! Held annually in Valencia on March 12-19 in commemoration of Saint Joseph, the Fallas are huge and colorful sculptures of papier mâché on wood built by teams of local artists (casal faller). Ranging from comical to moving, these grotesque effigies satirize celebrities, current affairs and local customs.

Some Fallas are even 15 metres high and can cost hundreds of thousands of euros. Each Valencia's neighborhood sponsors its own Falla by holding fundraising parties and dinners all year long, normally featuring the worldwide famous dish paella. When the town wakes after the plantà (the overnight construction of the Fallas) on the morning of 16 March, more than 350 have sprung up all over Valencia!

During this fiesta, around-the-clock events include also street parties, parades, open-air concerts and fireworks displays. After midnight on the final day (March 19), each Falla goes up in flames – backed by yet more fireworks and noisy thumps and explosions A popular vote spares the most-cherished figure, which gets housed for posterity in the Museo Fallero (Fallas' Museum).

Since 2016, the Fallas festival are part of UNESCO's intangible cultural heritage of humanity list.

Are you ready for photographing fallas?

EVENTS TO PHOTOGRAPH DURING THE FALLAS

During the Fallas' five main days all the city turns into a huge street party with historical and religious parades held through the night while children and adults throw noisemakers and fireworks at every street corner.

When shooting the parades remember to set the autofocus of your camera in AF-C position (AF continuous). In this way, as you are going to focus your camera on moving persons (walking), the focus will stay on the person(s) so long as your camera's shutter button is held half way down.

These are the main events during the Fallas. Their timing is fixed and fall on the same date every year. Check the official website (Spanish only) by the way.

Every morning at 8 a.m. brass bands leave the single casals in each Valencia's neighborhood and start marching down in the streets by playing lively music. Gunpowder's pungent smell start to flood Valencia's streets since early morning as plenty of  falleros begin to throw firecrackers while going in the street. You could see also falleras women wearing beautiful colorful traditional dress richly decorated along with traditional hair style and jewelry. The most beautiful parades take place in the old town.

This pyrotechnic event is fully characterized by the achievement of a noisy and rhythmic composition and takes place every day at 2 p.m. in various parts of the city. Head to Plaza del Ayuntamiento square for the main one where all the pyrotechnicians fiercely compete for the honor of providing the final Mascletà on the last day of Fallas. At 2 p.m. the Fallera Major traditionally dressed will call from the balcony of the City Hall for beginning the Mascletà. The same pyrotechnicians organize also a night version of the event in various parts of the city.

The Ofrenda de Flores is one of the most significative and beautiful acts of the whole Fallas festival. Organized by each casal faller on March 17 and 18, this flowering offer is a tribute to the Virgin Mary as Our Lady of the Forsaken made by an almost never ending procession of fallers in their beautiful costumes flowing from every city's ward. A huge wooden statue of the Virgin Mary and its large pedestal buillt in the middle of Plaza de la Virgen are covered with all the flowers brought by hundreds of fallers coming from all the city's casals fallers. The ceremony finishes around midnight between March 18 and 19 and its end is welcomed by stunning fireworks (La Nit del Foc or The Night of Fire). Other tributes include the one at San Josep bridge and in front of the monument of poet Maximiliano Thous. You'll see falleras and falleros wearing beautiful colorful traditional dress richly decorated along with traditional hair style and jewelry.

Definitely, the highlight of all Fallas festival. On the final night, all the fallas are burnt as huge bonfires and that's why these sculptures are so named (fallas means torches). The first ones to be burned (starting at 10 p.m.) are the fallas infantiles (children's fallas) which are much smaller and normally located just a few metres of distance form the main fallas. The normal fallas start to be burned around midnight. The first ones are those located in the various Valencia's neighborhoods while those in the city center are burned a bit later. The falla in Plaza del Ayuntamiento is the last one to be burned. Each burning is supervised by firefighters who water the nearby buildings and trees to avoid any dangerous fire developing around the single falla. Each falla is laden with fireworks which are lit first. As sculptures burn quickly be prompt with your camera and shoot continuously. Protect your lens with a hood. The fire and the flames should help you in keeping ISO setting at reasonable values for a while at the begin. Get there early to get the chance of shooting photos near the structure, especially if you head to the most famous ones. My suggestion is to choose a not famous sculpture in order to avoid too large crowds around you. 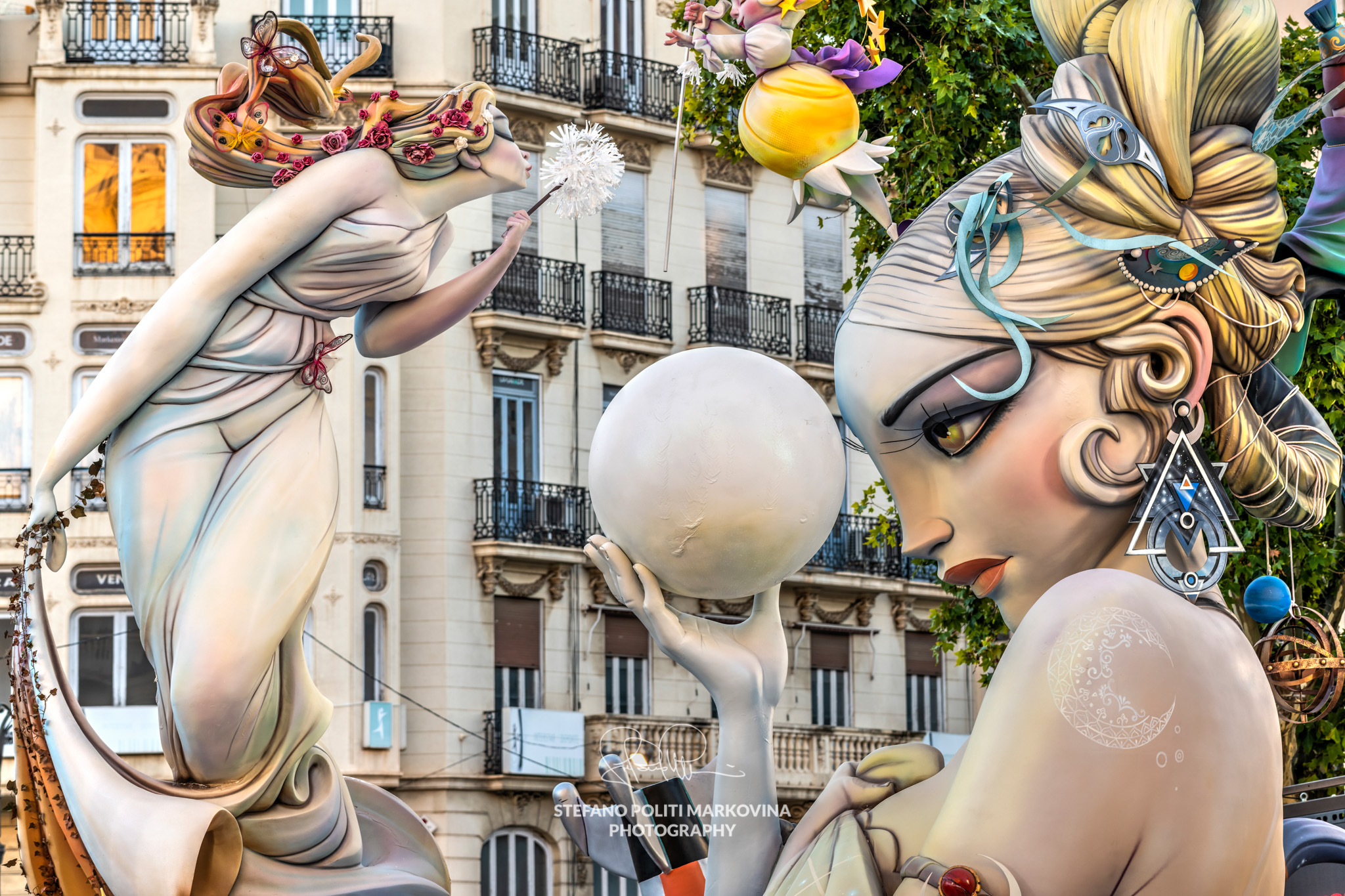 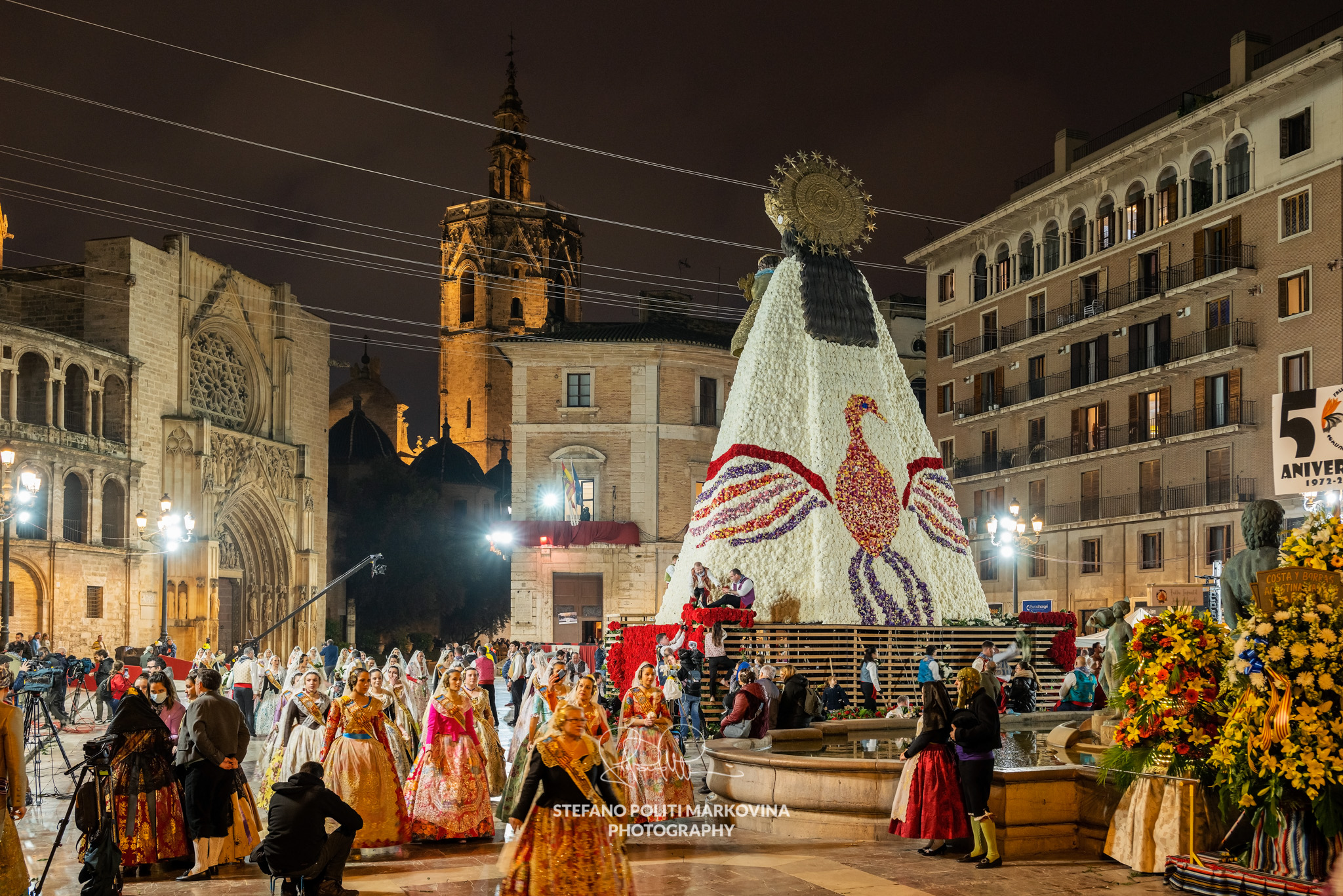 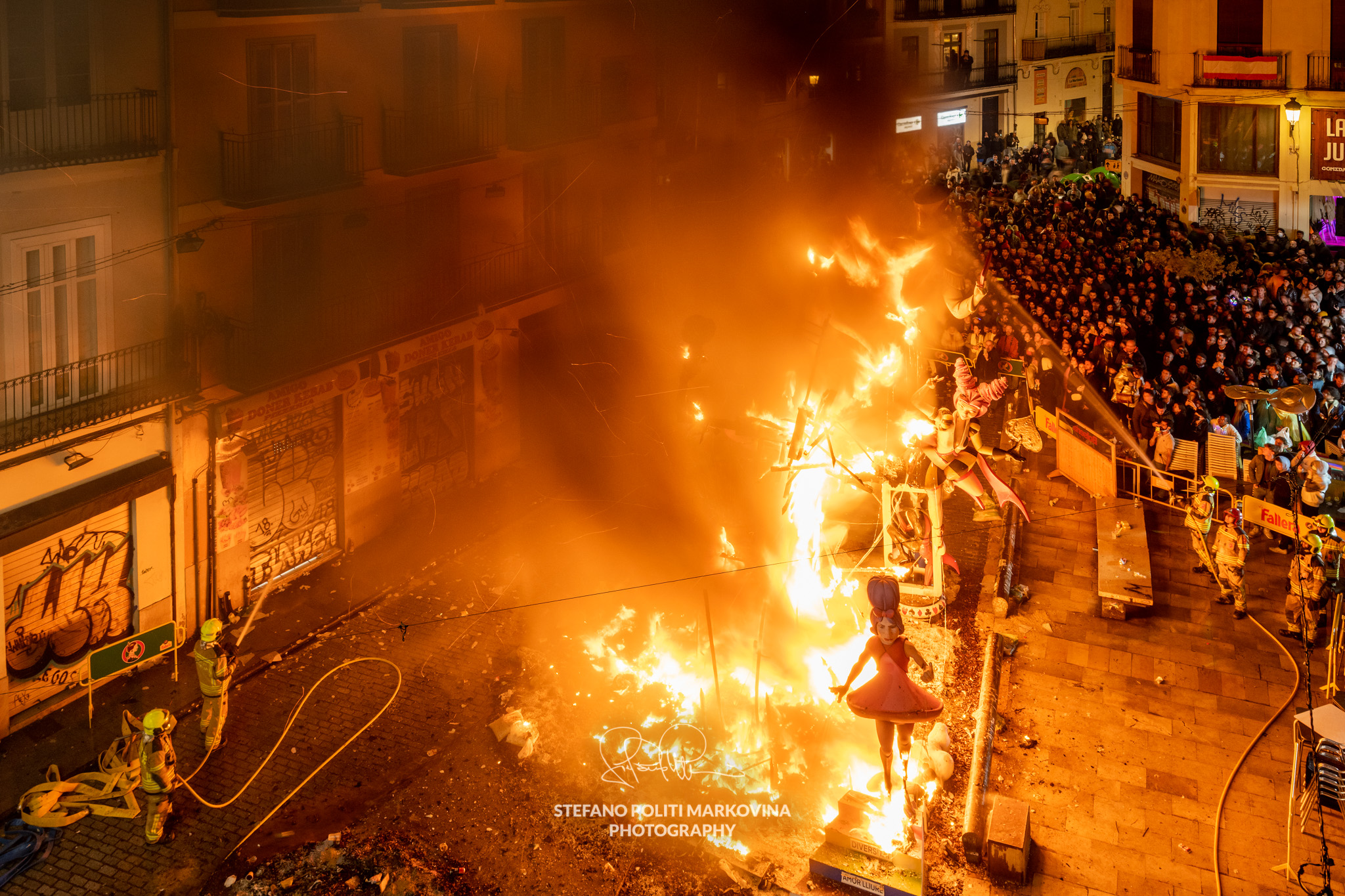 WHICH FALLAS ARE WORTH TO PHOTOGRAPH?

With over 300 sculptures mounted all over the city for the Fallas festival, it's very difficult to answer to this question. Each sculpture you will see is the final result of creativity, talent, special meaning and, above all, many sacrifices made by each falleros' group. In my opinion, each sculpture, from the most expensive one to the remotest located one has its own photographing charm. Considering taste is subjective at the end of the story, I can help you by saying the Falla Plaza del Pilar and the Falla del Convento de Jerusalem are the two sculptures mostly awarded first prize in the last 70 years. Both sculptures are huge, spectacular and will definitely cry a WOW! effect to your photos. Not necessarily, the largest sculptures are the nicest to be photographed. My suggestion is to take a walk across the old town and also in Ruzafa district where the most interesting and beautiful Fallas are normally located. Check also the Fallas'official website to know which sculptures were awarded in order to have an idea where heading to for shooting photos.

To shoot the sculptures bring a wide-angle lens and a telephoto lens too. The first lens will help you to photograph the whole structure. Especially in the old town, some Fallas are located in narrow places which will force you to use a wide-angle lens for getting all the sculpture in the photo. Instead, by zooming with a telephoto lens you will concentrate on details and figures of the single Falla you like most.

The giant sculptures or the ofrenda ceremonies are not the only subjects to take photos of during the Fallas.
Differently from most of European cities where Christmas lights are the top for decorating the urban streets, in Valencia is for the Fallas festival, instead. Beautiful street decorative lights are designed with creative motifs all over the city and some of them are really small pieces of art. During this incredible festival, Valencia looks spectacular as millions of LED lights are used to adornate all the streets where Fallas take place and the results are just breath-taking.

You may find the best decorating street lights in the neighborhood of Ruzafa (Russafa) and Malvarrosa.

In Ruzafa check these streets:

In Malvarrosa check this street: 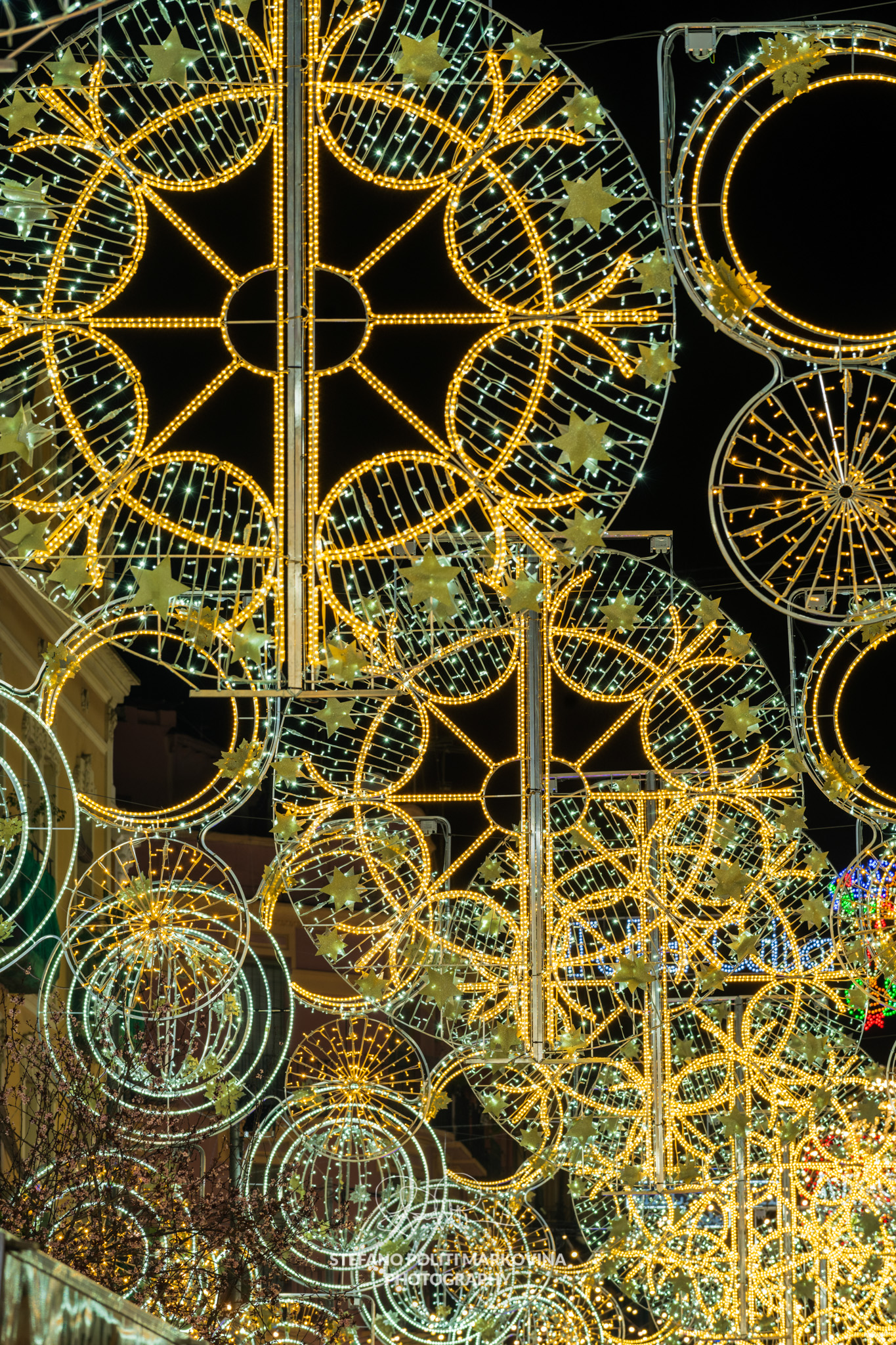 MORE TIPS ON WHAT SHOOTING IN VALENCIA: