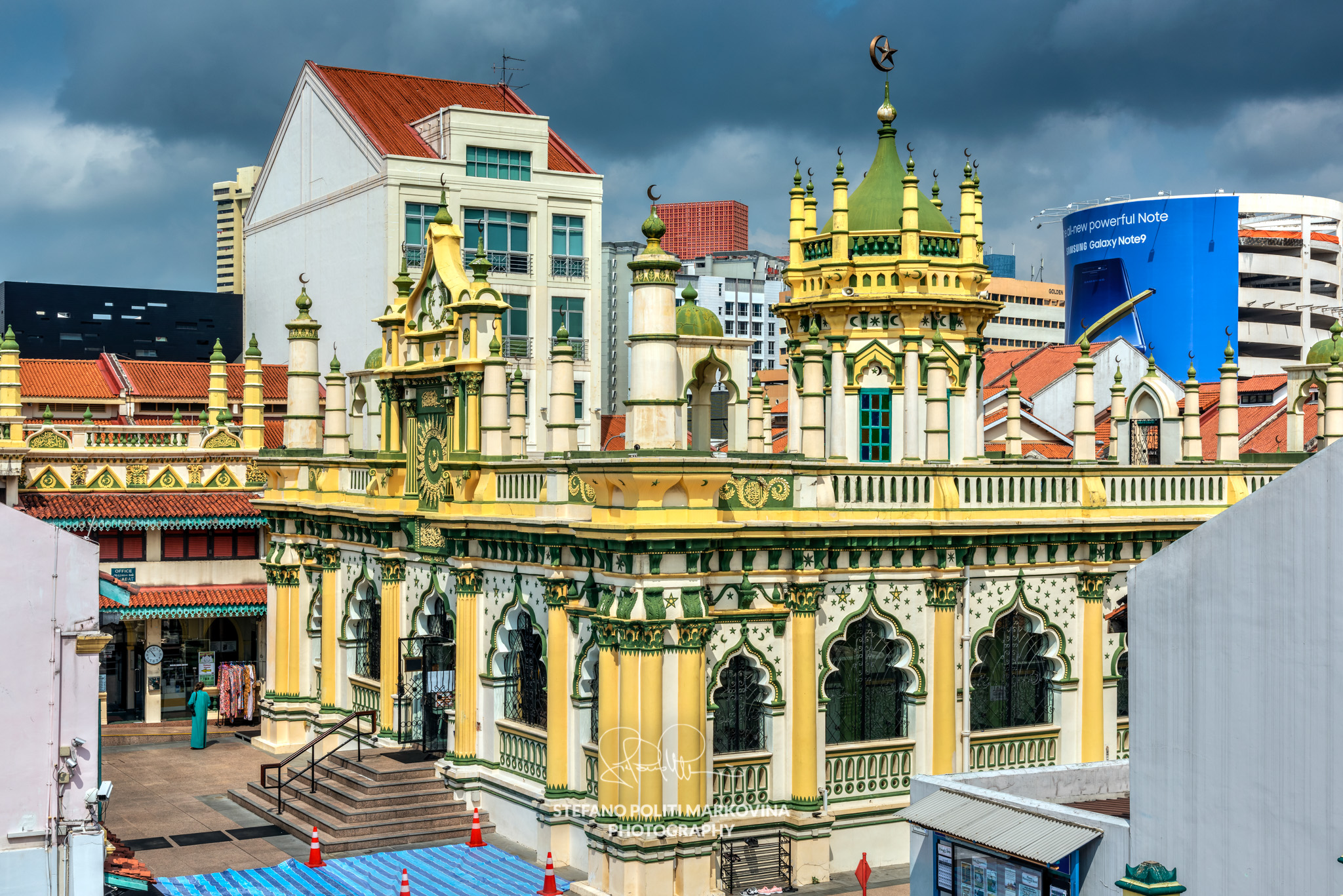 Wondering around in that melting pot of cultures that is Singapore, I ended up at Little India. I was looking for shooting some pictures of the famous and colorful Arab Street when, on the way there, I came across an interesting mosque trapped among some high rise buildings around. As the small square courtyard at the entrance offered a limited view of the mosque, I looked around for a more proper elevated view.

The two-story buildings lined up the quiet street next to the mosque caught my attention. I chose the entrance door of the closest building to the mosque and went upstair. I found a beauty salon at first floor and opted out for going to the next and last floor where the staircase ended right in front of a glass door. I saw a few tables setting through and the lights inside were off. The restaurant looked like still closed apparently but I tried to open the door anyway. I was lucky! The door opened and I quickly walked in. As I heard a great noise of voices, laughs and pots coming from the near kitchen, I discovered the room had a window with a direct view over the mosque. I hit the jackpot! I walked in the kitchen almost on tiptoe and after having said hello to the two cooks, I asked, by smiling like an idiot, if I could shoot a photo out of the window.

As soon as they realized they were no longer alone, they stopped immediately talking and laughing excitedly and they looked at me with stunned eyes. A dead silence felt in the kitchen for a few seconds that sounded like an hour long at least to me. Well, apparently they didn’t came across somebody come in and pretend to take a photo from the kitchen’s window that often! And no less when the restaurant is still closed! The girl cook broke the embarrassed silence with a loud laugh that sounded rather reassuring to me. Sure, sure, take a photo, she told me by laughing like hell and opening the window for me at the same time.

As she resumed her duties of cook, I shot several pictures of the Abdul Gafoor Mosque from the window. Once I finished, the other cook gently asked me where I was from and as he discovered I was Italian he asked if my family was fine. In just one second I realized I haven’t heard from my mum for a while, my father for ages, my brothers who knows and my husband was still flying back to Spain. I didn’t reveal nothing about what I was just discovered and instead I assured him everyone was doing great! I asked how his family was doing and, happy about my question, he answered everyone was fine. We both looked so happy to know that our mutual families were doing fine that it looked like we just won the lottery! I thanked both the cooks for having let me take a few pictures from their kitchen and once I said goodbye the usual Singapore’s uncomfortable heat welcomed me again down in the street. I am sure both the cooks inside the restaurant’s kitchen I just left are still laughing about that funny Italian photographer who asked them the permission of shooting some pictures from their window!